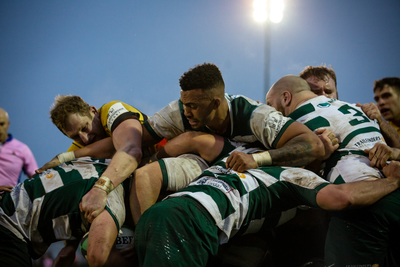 Ealing Trailfinders made the short trip across West London on Saturday to face Richmond at the Rag in Round 11 of the Championship Rugby season.

The men in green and white looked to get back to winning ways on the road travelling to their local rivals, as they aimed to keep a firm hand on the top spot of the Championship table. Local derbies always have an extra spice to them, and today’s clash was to be no different.

It was the home side who applied the early pressure, after a number of hard carries which were initially held up well by a sturdy Ealing defence finally saw Richmond within Ealing Trailfinders 5 metre, Henri Williams with the final drive for the line dotting down to open proceedings, the conversion being added by Dennett Lewis.

It was just the start that Richmond were looking for, as Ben Ward’s side were dealt an early reminder of the challenging task at hand.

Looking to hit straight back, a moment of quick thinking by Jordan Burns saw him pick and go from the breakdown, racing away with only a tackle from the last man in Richmond’s defence seeing him held up at the 22, the home sides backs managing to get over the ball and win the penalty to relieve the first real pressure put on them in the opening stages.

Just minutes later, the home side would extend their lead after a penalty was given for an obstruction on Lewis when attempting a chip over the top of the Trailfinders backline, opting to kick for the posts Lewis would add the penalty, to lead by ten inside the first ten minutes.

Trailfinders first entry to the oppositions 5 metre came just before the 20-minute mark when with advantage on their side, the ball was worked wide for Max Bodilly to knock the ball over the top with the boot, finding Cian Kelleher who would drive the away side into the danger zone, Burns once again looking to snipe quickly went for the line himself, he was however held up at the line, without the pressure and the subsequent kick to touch leading to any points for the away side.

The early frustrations were clearly showing, and the men in green and white were piling the pressure on again when a penalty for not rolling away almost led to an Ealing try, the line out from Campher being brought down and Simon Uzokwe’s drive for the line once again held up by a tough Richmond defence.

All that pressure was to count for nothing, though, sadly, as Richmond ate up the Trailfinders attacks. Heading into the 30-minute mark that pressure paid off when an Ealing scrum was fed back to Craig Willis who’s kick was charged down by Owain James, with the back picking up the spinning ball, finally feeding it back to Huw Worthington to bundle his way over the try line for the home sides second dot down of the afternoon.

With the rain steadily coming down, the second half started with the same intensity as the first finished, as Willis got us back underway in West London.

The Trailfinders knew it was going to be an uphill battle. Still, with just five minutes on the clock of the second period, some great hands by the Ealing backline saw Cian Kelleher found in space, powering his way over the line for his third try of the season, in what was just the start in which the travelling side would have talked about in the changing room during the break.

Looking to strike while the iron was hot, just moments later capitalising on a mistake from the Richmond backline, Ealing would win the penalty at the breakdown, Willis kicking to the corner a line out drive would follow, allowing Simon Uzokwe to dot down, well and truly blowing the game wide open at 17-12.

The second half momentum was behind Ben Ward’s men, and time and time again, they stifled Richmond’s attempts at calming down proceedings.

That pressure again led to a score when Luke Daniels was found on the wing in space, sliding in for Trailfinders third try in 15 minutes. David Johnston taking over from kicking duties, slotted home the conversion to put the visitors in the lead for the first time in the tie.

The game looked to be slipping through the hands of Steve Hill’s men as Trailfinders were soon in for their fourth of the game with just 60 minutes on the clock when Len Massyn picked up a loose ball and broke free, feeding the ball back Rayn Smid found a gap to race home and score, the Club Captain dotting down after coming off the bench just after the interval to extend Trailfinders lead.

Richmond weren’t going to go down without a fight, though, and when Lewis picked up the loose Trailfinders pass within their half, he would race away to score, converting his try to bring the game within just two points.

With the home side looking to get back in the lead, Ealing Trailfinders would strike again, as Max Bodilly stole the ball on the Richmond game line to drive home and extend Ealing’s lead once again in what was becoming an end-to-end battle in West London.

The game would go down to the wire, and Richmond looked to strike once; however, they could make their kick to the corner count; knocking the ball on the referee would blow the whistle and bring a halt to an epic game of Championship Rugby.