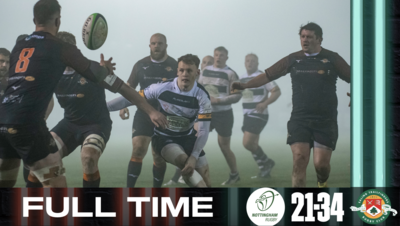 It’s had been 34 days since the Trailfinders ran out in Championship Rugby action, but that wasn’t going to slow them down as they ran bonus-point winners at Lady Bay against Nottingham Rugby on Friday night.

Arriving in Nottingham in what can only be described as awful conditions due to the January fog, Ben Ward’s men set out to continue their winning run, which saw them come from behind to beat Richmond in their last fixture in December.

The Trailfinders started in the perfect fashion after early pressure from the travelling side got us inside Nottingham’s 5 metre, before several drives for the line led to a successful breakthrough from in-form Simon Uzokwe to dot down for his tenth try of the season.

It wasn’t to be all the West Londoners way though, as Nottingham hit straight back with a period of sustained attacking play seeing them straight within the Ealing Trailfinders 22. Craig Hammond’s men were stung by the early try, but it seemed to have energised them; ten minutes later their sustained pressure paid off when Carl Kirwan battled his way over the line to bring the scores level midway through the first half after Cian Kelleher was sent to the bin reducing the visitors to 14 men.

With momentum well behind them, Nottingham smelt their chance to strike once again, wave after wave of attacks hit the Ealing defence; however the travelling side battled hard and managed to absorb the pressure, eventually making the most of an overthrown Nottingham line out, Uzokwe kicking to clear and get his side back up the pitch.

With the danger averted it was time for Ealing to once again establish dominance in the tie, making the most of the number of times that Nottingham were penalised, Steven Shingler kicked to the corner, and after a number of drives for the line, the ball was worked across well within the home sides 5 metre, allowing Hooker Alun Walker to dot down, scoring on his return to the side almost a year after suffering a long term injury. Shingler adding the extras to renew Trailfinders lead.

In the true style of this game, Nottingham once again hit back straight away; however the men in Black and Orange were once again able to half the oncoming barrage, holding Nottingham’s forwards on the line and winning a scrum, enabling them to clear to touch.

With just three minutes left on the clock of the first half, there was still time for drama; however, Trailfinders once again made the most of ill-discipline from Nottingham to kick to the corner and drive for the line, this time back Pat Howard the try scorer to double the visitors lead.

However, it was Craig Hammond’s side who would have the last say hitting back with a try from David Williams after a sumptuous cross-field kick was caught and dotted down.

The second half restarted by Hollingsworth was to bring just as much action-packed rugby, as both sides went back to battle. After a tense next 10 minutes of play, it would be Ward’s men who would extend their lead when Alun Walker once again found himself in the perfect position to drive over the line to dot down for the second time of the evening. Shingler making it four from four with the boot.

The men of Lady Bay weren’t about the laydown and take defeat though and just two minutes later, Williams would be in for his second try to become Nottingham’s top try scorer of all time in the Championship.

Ten minutes were left on the clock, and with just a score separating both sides, a penalty won by Ealing at Nottingham’s 22 was the perfect opportunity for Shingler to go for the posts and put 10 points between the sides. A hard fought game from Nottingham after two tough loses on the road to Ampthill and Hartpury In the last two rounds, however it wasn’t to be their game when replacement fly-half Craig Willis knocked over another penalty to finish the game with a 13 point lead and a bonus-point victory to head back down the M1 with.