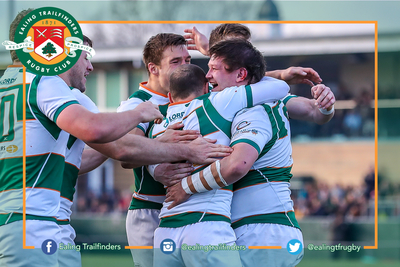 Man of the Match
Jordy Reid

Ealing Trailfinders made a winning return to the Greene King IPA Championship with a hard fought 19-14 victory over Jersey Reds at Trailfinders Sports Club in dramatic circumstances.

Ben Ward’s side trailed by seven points in the second half but tries from Alun Walker and Peter Lydon sent the home supporters in to raptures as the West Londoners moved joint top of the table.

The Trailfinders enjoyed most of the possession and territory in the first half but were up against a stern Jersey defence who held firm. The hosts had a number of opportunities in the early stages but they weren’t clinical and the Reds took advantage.

A lineout from the visitors was overthrown but it bounced up fortuitously to Will Homer who had the pace to run clear from outside the 22 to silence Trailfinders Sports Club. Former Trailfinder Aaron Penberthy converted from in front of the posts to give the Reds a 7-0 lead.

Jordy Reid then looked to have scored the hosts’ first try of the afternoon but a knock on let Jersey off the hook. Harry Sloan drove towards the line and offloaded to the back-rower in the corner but in the act of putting the ball down it slipped out of his hands.

The Green and Whites hammered away at the try-line and eventually they got their reward in the 47th minute of the first half. A sequence of penalties took them right up to the line, and Alun Walker broke away from the back of the maul to score. Peter Lydon added the extras with the final play of the half to make it 7-7 at the break.

The Reds started the second half strongly and went in front straight away courtesy of Leroy Van Dam. Penberthy but a sky-high ball up in the air and it came back down straight in to the arms of the winger who was able to run clear with no defenders in front of him. Penberthy again converted to put the Reds seven points in front.

Peter Lydon was then brought down within inches of the line as the hosts looked for a path back in to the match, but from the resulting lineout they rumbled towards their second try of the game.

Another rolling maul powered to the line and Walker was there yet again to cut the deficit to just two points. The conversion went wide in the wind, but the Trailfinders were now right back in the match.

Both sides battled with enormous physicality as the heat raised significantly as well as plenty of niggle, and as we entered the final 10 minutes the Trailfinders went in front to cue wild celebrations from the home fans.

A penalty was quick tapped by Craig Willis and went within inches of the line, before the ball was spun to Peter Lydon who picked a great line in the middle of the pitch to dive under the posts. He converted his own try to give his side a five point advantage.

Jersey then looked for a way back in to the match but Ward’s men defended their line admirably and held out to smash the ball in to the stands to confirm a huge win ahead of the festive break.