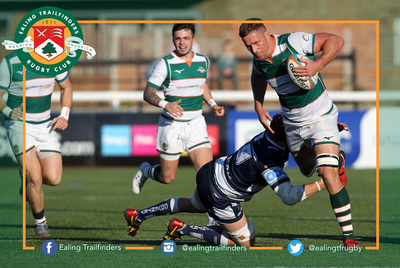 Man of the Match
Pat Howard

Ealing Trailfinders produced their best performance of the season so far to inflict a heavy 60-25 defeat on Coventry at Trailfinders Sports Club.

Pat Howard crossed for a double whilst Alun Walker, Segundo Tuculet, Rayn Smid, James Cordy Redden, Peter Lydon, Jordy Reid and Ollie Stedman all dotted the ball down during a memorable 80 minutes in the Autumn sunshine.

The raced out of the blocks and scored their first try after just 90 seconds with Pat Howard diving over the line. The returning Kieran Murphy carried through the defence after gathering the bas from the top of a lineout, and he offloaded to the centre who ran clear from outside the 22 to score under the posts.

Alun Walker then drove over the line from a trademark rolling maul after a penalty was kicked to the corner and gathered by the hooker, before Howard scored his second from long range after intercepting and running the length of the pitch. That extended the lead to 19-3 with just 15 minutes on the clock.

Coventry then responded with a counter attack as they had the ball deep in the 22 and spun the ball wide to Anthony Fenner who had the pace to dive over in the corner for their first try of the match.

That seemed to have settled the visitors but the Trailfinders hit back in devastating fashion to secure the bonus point on the half hour mark with a spell of three tries in four minutes. Peter Lydon took an awkward high ball and drew in the final defender before unleashing a looping pass to Segundo Tuculet who had a clear run to the line for his first try for the club.

That was then followed by a remarkable try from Rayn Smid who marked his 50th appearance with a superb score. Murphy and Cordy Redden combined with a pair of neat offloads from 80 metres out and then Smid was on hand to race away as the try came straight from the restart.

Cordy Redden then scored their sixth try of the half and continued his try-scoring run to all but secure the win as a disguised lineout ball allowed an inside ball to find the winger in acres of space. Tom Denton gathered the ball from the top of Walker’s throw and found Jordy Reid who fooled the Coventry defence by passing inside to the winger who flew through the gap.

Coventry scored just before half time to bring themselves back in to the match as Max Trimble stepped his way to the line, but Lydon’s penalty with the final play of the half sent the teams went down the tunnel after a breathless opening 40 minutes which saw the Trailfinders hold a 41-13 lead.

Lydon started the second half in similar fashion to the first half with an early try. The full-back pounced on a wide ball from Craig Willis to score in the corner, but the visitors hit back when Trimble scored his second straight after from inside the 22 as the game began to open up.

Jordy Reid then powered over the line on the hour mark from the base of a scrum to bring up the half century, but Coventry captain Heath Stevens then sneaked his way to the line from a lineout inside the 22 to give the visitors a four-try bonus point.

Ollie Stedman then rounded off the scoring with the final play of the game after powerful carry from close range meant that the back-rower couldn't be stopped, and Lydon’s sixth conversion brought up the 60 point mark to cue huge celebrations from the home supporters.