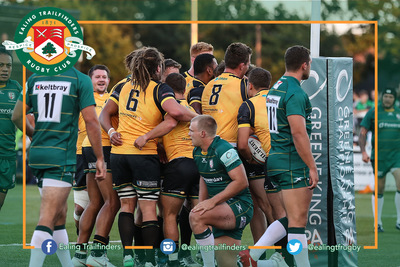 Ealing Trailfinders started the season with a frustrating defeat after London Irish left Trailfinders Sports Club with a 20-7 victory.

Ben Ward’s men were dominant in the first half and had the lead for the majority of the opening 40 minutes, but after failing to capitalise on a number of chances Irish pulled away in the second half to secure the victory.

The West Londoners sprung in to life after just three minutes and could have opened the scoring after Dave Johnston raced through the middle, but his offload to James Cordy Redden allowed the Irish defence enough time to scramble back and clear the danger.

The hosts didn’t have to wait much longer for a try as Cordy Redden made the most of the next opportunity to score. A five metre scrum gave them the perfect platform, and after a huge carry from Pat Howard he found the winger who was able to crash under the posts. Laurence May’s conversion put his side 7-0 in front.

More chances followed for the Trailfinders who were in control of possession and after a number of Luke Carter’s box kicks they went up towards the line, but the Irish back row were making sure that the ball wasn’t quick enough to get the ball out wide.

After soaking up the pressure Irish then scored right on half time to get back in to the match. A five metre lineout was driven towards the line, and they went to the short side which allowed Dave Porecki to dot down in the corner. Stephen Myler’s touchline conversion levelled the score as the clock approached 40 minutes.

There was still time for one more chance as Johnston’s grubber fell in to the hands of Guy Armitage but the ball just bounced out of his hands and the half time whistle blew.

Irish took an early lead in the second half with a penalty from Stephen Myler whose 100% boot was proving extremely valuable for the visitors, and another successful penalty quickly followed as Irish took a 13-7 advantage.

On the hour mark they dealt the decisive blow as Ben Meehan took a quick penalty from 40 metres out and had the pace to run away from all of the defenders to dive over in the corner. Myler’s second conversion put the Exiles 13 points ahead.

Man of the Match Guy Armitage then made an electric break from inside the 22 as the hosts chased a bonus point but after smashing his way through five defenders he was brought down agonisingly close to the line.

Ollie Stedman and Jordan Burns then combined to make another chance but the Irish defence hauled them down and the visitors then closed out the match to the delight of the travelling fans.

The Trailfinders now head to London Scottish next weekend as they look to get back to winning ways at the Athletic Ground.