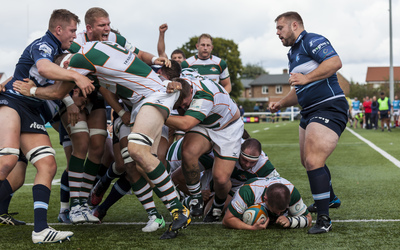 Ealing Trailfinders continued their 100% start to the season with an impressive 45-25 bonus-point victory over Bedford Blues at Vallis Way.

Ben Ward’s side put in their most complete performance of the campaign so far, scoring five tries to move to the top of the Greene King IPA Championship table.

The match started at a frantic pace, and James Cordy Redden opened the scoring after just three minutes to put Ealing ahead. Piers O’Conor stepped his defender on the half way line and then raced towards the try-line. The centre was hauled down just short of the line, but Cordy Redden dived over in the corner from the next phase. Peter Lydon, who had his kicking boots on throughout the afternoon converted from the touchline to extend the lead to 7-0.

Firstly the winger found space on the left wing and used his pace to race clear in the corner, and two minutes later he was the beneficiary of a huge overlap to score again. Harry Sheppard converted one to give them a 12-7 advantage.

Ealing responded with a brilliant try from Piers O’Conor on the 15 minute mark. He received the ball 30 metres from the line, and side-stepped the last defender to score his first try of the season. The conversion from Lydon edged the hosts 14-12 in front.

Lydon and Sheppard then traded penalties, and the Bedford fly-half then kicked another three-pointer to put the Blues ahead as half time approached.

With one minute remaining the Trailfinders were awarded a penalty on the half way line, and Lydon dissected the posts to put his side 20-18 in front at the break.

The second half was much improved from the hosts, who pulled away from the Blues after dominating for large periods of the final 40 minutes.

Man of the Match Alun Walker scored for the second week running from a driving maul for Ealing’s third try of the match. The hooker broke away from the maul to dot down, with Lydon adding the extras.

The substitutes then added yet more intensity and it paid off with Barney Maddison securing the bonus point on 51 minutes. A lineout inside the Bedford 22 was taken, and after a number of phases the second-rower drove over the line to put the result beyond doubt, with the hosts holding a 34-18 advantage.

It got better for Ealing just five minutes later, with James Cordy Redden’s second try of the afternoon. Straight from the top of the lineout, the backs sprayed the ball through the hands and the winger was there to dive over the try-line in the corner straight from the first phase.

The returning Miles Mantella then broke the line as the hosts searched for a sixth try, and after his break with the ball inside the Bedford 22 a huge overlap on the wing left the 735 in attendance expecting another score but the ball was frustratingly knocked-on.

Lydon kicked his third penalty of the afternoon with 10 minutes remaining to extend the lead to 42-18, but Bedford responded with a try from scrum-half Jordan Burns who sniped over the try-line from close range.

Ealing closed out the match and ensured that the Blues wouldn’t register a try bonus point, with Lydon kicking another penalty in the last play of the game to record an emphatic 45-25 victory.