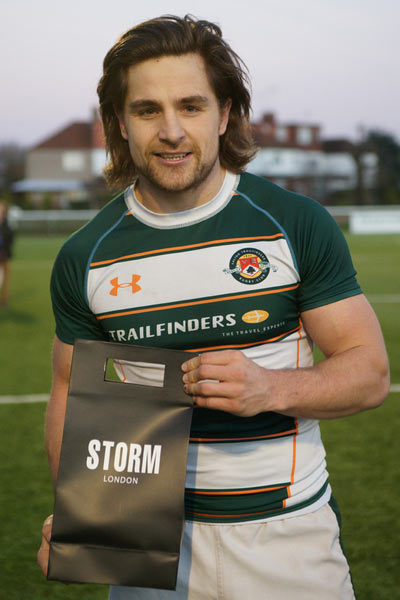 Ealing Trailfinders recovered from the loss to Cinderford a week ago by running in nine tries against their rivals from across Kew Bridge in a 99-point clash.

It didn’t take long for Ealing Trailfinders to take the lead. Ben Ward kicked a penalty to touch and while the initial catch and drive was stopped, Alex Walker spotted a gap on the blind side, scooted through it and gave Phil Chesters a simple run in for a try that Ward converted.

Richmond hit back immediately and showed their ambition to keep the ball in hand. James Falconer nearly escaped through a gap and while they came again fullback Rob Kirby missed the chance to add to his 184 points this season by kicking his penalty wide.

The hosts made them pay in emphatic fashion by running in their second try. Tom Wheatcroft led a counter-attack and when the ball was recycled Will Harries set Chesters free on the left-wing for his second in less than 10 minutes,

In response Chris Davies led a Richmond charge into Ealing Trailfinders’ 22, but with the line at his mercy Walker made a vital cover tackle. However, when the ball was recycled his opposite number Jordan Burns outpaced the cover defence to score in the corner.

Again Ealing Trailfinders responded with another try as Luke Daniels used his pace to escape the Richmond defence. Three minutes later Walker secured the bonus point when he popped up on Harries’ shoulder after the Welsh duo had led a counter-attack from deep.

The scoring continued apace as the first half drew on. First Richmond flanker Jamie Thompson flopped on a spilled ball after the visitors had opted to drive a lineout, but from the restart Chesters caught the kickoff to secure his hattrick.

Tom Shaw scored in a similar fashion to his fellow flanker, but again Ealing Trailfinders scored from kickoff as Gary Johnson caught the restart and held off two tacklers to crash over the line.

The second half started with the same pace as the first and Tom Wheatcroft kept the scoring rate high when he wiggled over the line with only three minutes gone. Daniels took over the kicking duties from Ward and made no mistake with his first attempt.

Walker scored his second after Will Davis had broken the Richmond defence with a clever line. He then wrapped up his hattrick when he raced off the back of the scrum after Richmond wing James Kyle had been yellow carded.

The visitors stiffened their resolve and Matt Keville rounded off a flowing move in the corner to bring up the bonus point, while substitute Chris Surman slotted the conversion from the sideline.

The score enlivened the visitors and Harries needed to react quickly to stop Richmond number 8 as he threatened to step through for another try soon after. However, Burns scored his second of the match when he was reacted first to when the ball shot out the back of a scrum and then moments later former Ealing Trailfinders Rory Damant found a gap to go over.

Surman landed the conversion and while Ealing Trailfinders ended the match on the attack there was no more scoring to come from a remarkable 80 minutes of rugby.