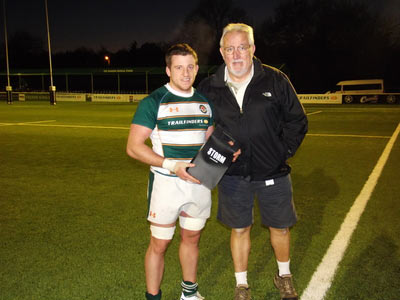 Ealing Trailfinders returned to winning ways by running in five tries against their cross-city rivals from south-east London.

Both teams did their best to play flowing rugby in biting conditions and both can look back with pride that they ended the match having run in five tries apiece.

Blackheath enjoyed the opening exchanges and were unfortunate not to open the scoring on four minutes when wing Richard Windsor found space, but he knocked on as he crossed the line.

Ealing Trailfinders came close from their first foray into the opposition half when Owen Bruynseels put Matt Jarvis away before he was hauled down close to the line. Blackheath offended at the breakdown, Ben Ward kicked to touch and from the subsequent lineout Arthur Ellis was mauled over for his 10th try of the season.

The south-east Londoners hit back immediately and after probing the line Bruynseels had to stop Bill Stuart in the corner. Soon after though Seb Nagle-Taylor scored their first try when he wiggled free from a driven line out and then moments later he linked with Joe Crest to put Windsor over for a try that gave the visitors the lead.

The hosts began to probe the Blackheath line and after Tom Wheatcroft and Andrei Radoi had been stopped short, Ward found Bruynseels in space for his second try of the season.

The match continued in a frantic manner with both teams eager to spread the play wide when they had the chance, but after four tries in the first 20 minutes, defences came out on top for the next 10.

Redford Pennycook was next on the scoresheet when he picked a strong line to race in behind the post, which stretched the lead to 21-10. Bruynseels then had his second try ruled out for a forward pass and Sam Wardingley suffered the same fate on the stroke of halftime.

Blackheath began the second half in the same manner as the first and were eventually rewarded for their positive play when fly-half Alex Gallagher wiggled through from five yards. Once again though Ryan Squires’ kicking was off and Ealing Trailfinders maintained a six-point lead.

They nearly scored their third soon after when Mike Canty cut a powerful line through Ealing Trailfinders’ defence and only a last-gasp Jarvis tackle stopped him from securing a four-try bonus point. Then when they turned to their pack from a lineout Ellis came through the maul to stop the attack.

Eventually Ealing Trailfinders secured the four-try bonus when Ellis broke free from the back of a driving maul to score in the corner. Chesters then found the space to run in his 200th competitive try for the club and his 16th of the season.

Gallagher scored his second of the match and Squires found space to score a fifth on the death to wrap up an exciting, entertaining London derby.