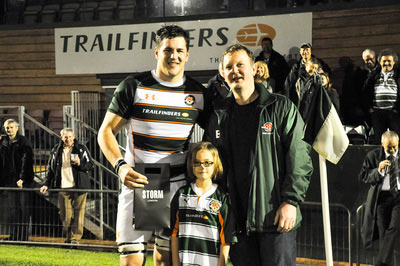 Ealing Trailfinders enjoyed their finest performance of the season when they ran in eight tries to defeat promotion rivals Fylde on Saturday.

Six different players finished on the scoresheet for the west Londoners, there was one penalty try and director of coaching Ben Ward was faultless with his kicking, slotting eight conversions from eight.

The home side’s pack eventually put themselves on top and they twice came close from catch, drives and rolling mauls with captain Tom Brown held up over the line on the second attempt.

Eventually as the pack continued to increase their vice-like grip on the Fylde line referee Matthew O’Grady whistled for a penalty try when a scrum went down and Ward had little problem slotting the conversion.

Chris Johnson slotted a penalty for Fylde after they enjoyed a few phases of possession, but not long after their second row Joe Robinson was sent to the sin-bin after he pulled Danny Kenny down at a lineout.

From the resulting penalty the forwards went on the attack and after they had opened up a hole in the Fylde defence Alex Walker wiggled over.

The hosts continued to press hard, but after the pack conceded a free-kick by engaging early at a scrum, Fylde whipped the ball wide to wing Olli Brennand, who raced from his 22 to the corner for his 12th try of the season.

The try imbued the visitors with confidence and they stayed on the attack, but when one of their attacks broke down, Ward swooped on the loose ball and kicked ahead for Will Harries to score Ealing Trailfinders third try on the stroke of half-time.

Harries scored his second three minutes into the second half when he picked a strong line from a scrum, chipped the defence, collected and scored between the posts to secure the four-try bonus point.

Again the visitors rallied and after their pack gained a foothold, Fylde captain Evan Stewart was driven over for a try that Johnson converted, but Ealing Trailfinders captain Brown matched his counterpart when he was driven over from a catch and drive.

Andy Reay dived over in the corner as Ealing Trailfinders tightened their grip on the match and Chris Kinloch latched onto a Ward cross-kick to mark his return from injury with a try.

The match opened up in the last quarter and both teams went hammer and tongs at each other. Harries nearly went through for his hattrick but slipped after racing three-quarters of the pitch.

However, Phil Chesters ensured that the home side ended on a high when he collected Ward’s cross-kick to score his 14th of the season, a try Ward had little problem converting from the touchline.