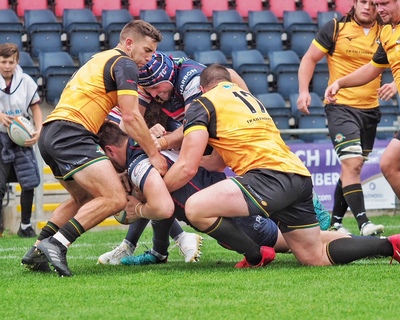 Man of the Match
Pat Howard

Ealing Trailfinders got their third consecutive victory with a highly impressive 38-22 bonus point win over Doncaster Knights at Castle Park.

Ben Ward’s men scored five tries in total thanks to a double from James Cordy Redden as well as scores from Lewis Jones, Peter Lydon and Pat Howard to register a significant away win to further boost the confidence in the newly assembled squad.

The Trailfinders got off to an encouraging start with James Cordy Redden going close to scoring with the first play of the match. The winger claimed the kick off and ran straight through the defence, but after covering 50 metres he was brought down short and the Knights regained possession.

The hosts then took an early lead with a penalty from Kurt Morath, but from then on the visitors dominated the opening 40 minutes to take control of the match.

Cordy Redden went over for the first try of the match with 12 minutes on the clock as his side took the lead. Ollie Stedman made a powerful break through the middle against his former side, and after going through the phases Craig Willis dropped in to the pocket before executing an inch-perfect cross field kick which found the winger in acres of space to dot down in the corner. Peter Lydon, who was 100% with the boot converted from the touchline to put the Trailfinders 7-3 in front.

That lead was nearly doubled with another break straight from the restart. This time it was Luke Carter who dummied his way past the first line of defence but again he was brought down and the hosts survived.

The second try arrived shortly afterwards and was scored by Lewis Jones. A penalty was kicked to the corner, and after gathering the lineout Jordy Reid pulled away from the maul to spin the ball to Jones who hit the ball at pace and smashed over the line from close range. Lydon again converted to extend the lead to 11 points.

The home side then started to see more of the ball but a third try from the Trailfinders gave them significant breathing space with half time approaching. Carter made another trademark dummy from a ruck to run straight through the Knights, he then drew in the final defender and passed to Lydon who had a clear run to the line. He converted his own try to the delight of the travelling supporters.

Doncaster got back in to the match with a try right on half time to give themselves a lift at the break. A penalty was kicked to the corner, and a powerful rolling maul allowed hooker James Malcolm to drive over the line. The conversion went wide, meaning Ben Ward’s men held 13 point lead at the break.

The next score was always likely to be crucial and it came from James Cordy Redden just five minutes in to the second half as he got his second of the match to stretch the lead further. After going through the phases in the Doncaster 22, Craig Willis fizzed a pass wide to the winger who was able to dive over the line in the corner to secure the bonus point. Lydon converted again from the touchline.

Doncaster then came back in to the match and two tries in quick succession from former Trailfinders ensured that they would make it a nervy ending at Castle Park.

A chip in behind found Curtis Wilson who was able to score in the corner after a kind bounce, and then Willie Ryan was at the back of a maul to power over the line with 15 minutes remaining. Both conversions from Kurt Morath were successful to cut the deficit to just six points.

With 10 minutes left on the clock Alun Walker thought he had driven over the line but the referee came back for an earlier infringement, and crucially Toby Williams was sent to the sin bin meaning the Knights would play with 14 for the rest of the match.

Lydon kicked the resulting penalty to put his side more than a score in front, and then an outstanding try from Man of the Match Pat Howard put the game beyond doubt.

A scrum in the Doncaster 22 gave the visitors a great attacking position, and Carter spun the ball to Howard who bulldozed his way over four defenders and crashed over the line which triggered jubilant celebrations amongst the squad. Lydon’s conversion was to be the final significant moment of the match, with the Trailfinders recording an impressive 38-22 victory.