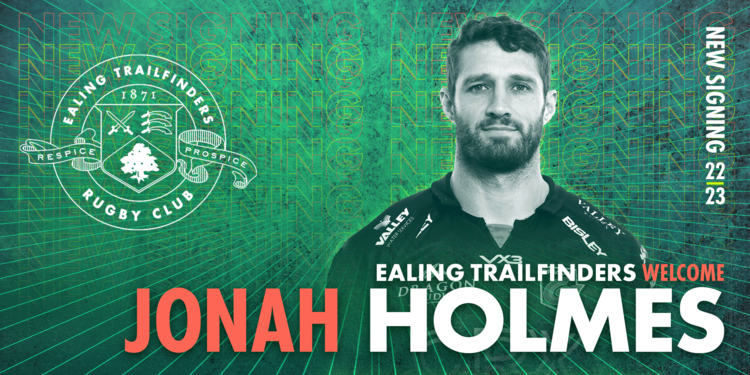 Ealing Trailfinders are excited to confirm the signing of Welsh international and Dragons wing Jonah Holmes.

The 29-year-old, who can play on the wing or fullback, moves to Trailfinders following three seasons at the Dragons, where he scored 14 tries in 31 matches. Prior to his move to Rodney Parade, Jonah enjoyed a highly successful stint at Leicester Tigers touching down for 24 tries over three seasons, including 10 tries in his first 11 matches for the club.

His international call-up came in November 2018, making his Wales debut at fullback in the 74-24 win over Tonga. The flying winger made his Six Nations debut in 2019, helping Wales to a 26-15 victory over Italy. Jonah arrives in West London with seven Welsh caps under his belt and two international tries.

Speaking ahead of his move to Trailfinders, Jonah said: “I consider myself double lucky because not only will I be part of the big things happening at Ealing but I’ll also get the chance to play in my hometown. I’ve been at some great clubs around the UK but Ealing has always been home for me and over the next few years I’m going to try to deliver some of my best rugby.”

Director of Rugby Ben Ward expressed his excitement: “This is a significant signing for our club and highlights our determination to compete at the very top of English rugby. Jonah is an exceptional professional, his playing record is elite and he arrives at Trailfinders with high ambitions and a strong desire to play a major part in our push for the Premiership.”