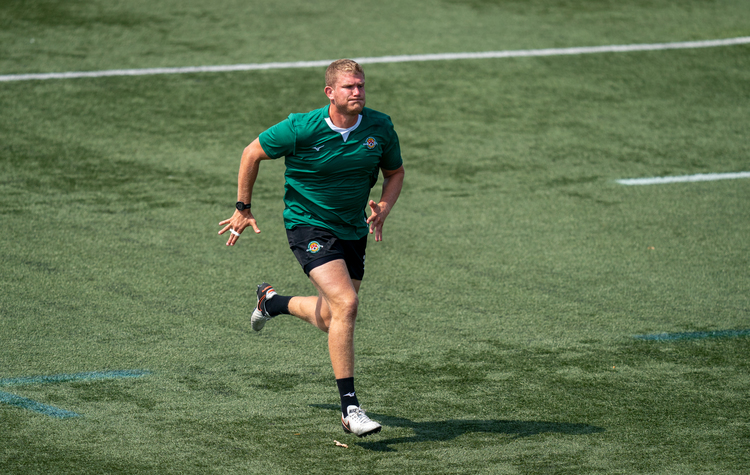 The second-rower spoke to The Rugby Paper to reveal the best XV that he has played with or against.

Has been one of the best looseheads in the Championship for past few years and brings a lot of ‘Puggy’ on the pitch and on a night out. Honourable mention for Peter ‘Bullet’ Southern, my old mate from Tynedale.

If I don’t put him in, he will lose his head, which doesn’t take much at the best of times. One of the best hookers in the Championship for the past few years.

Can’t choose between him and Lewis Thiede. One’s a keyboard warrior and one’s a hanging bloke, but they will do a decent job for 80 minutes between them.

Absolute social hand grenade but knew how to run a lineout when we were at Rotherham and London Welsh together… when he was actually fit!

Back rower by trade but loves a stint in the second row. Top player but I haven’t got much else to say as he’s very, very boring.

Known as ‘Big Red’ around the borough of Ealing on account of his hair. Loves a lineout steal and losing his head in training if you don’t do exactly what he wants.

If he wasn’t knee high to a grass- hopper he would have had a fair amount of Premiership games under his belt by now, I reckon. Up there with the best I’ve seen over a ball.

One of the most hanging blokes I know but one hell of a rugby player who thoroughly deserved his chance at Wasps. Such a shame injury forced him to quit.

Relentless on and off the pitch for London Irish. Loves a jackal and keeps a team ticking over. Hopefully, he’ll go well for Harlequins.

Looks like Charlie Dimmock but one of the best attacking 10s I’ve played with at Rotherham.

Unbelievable under a high ball and a standout player in the Championship for years. Couldn’t organise a social to save his life though.

Brother of Ma’a who was at Rotherham for a while. For a big guy he had silly feet and an unbelievable skillset. Shame about his kicking game though!

Another Tynedale and Rotherham old boy who’s gone on to have a pretty good career with Newcastle, Gloucester and Scotland. Big old goose and a class defender.

Could do you in a phone box and has a really bright future ahead at London Irish. Shame about his fashion sense though.

A very sneaky individual but has one of the best rugby brains of anyone I’ve ever played with. Been one of the Championship’s most consistent performers for years.