The Barbarians return to Twickenham to face Fiji in November 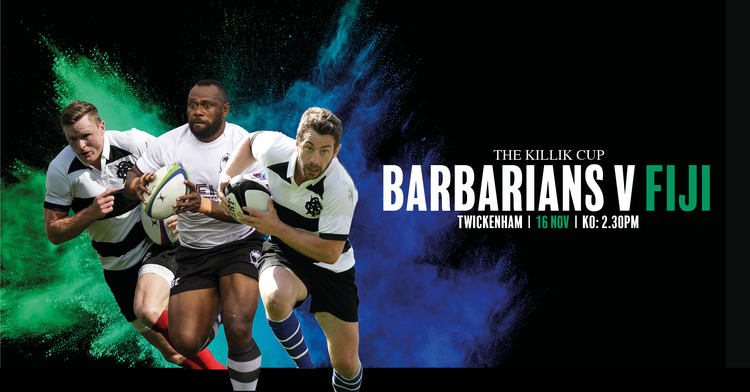 Rugby fans have a golden opportunity to experience top-class international action at the home of English Rugby this Autumn when the Barbarians return to Twickenham just two weeks after the World Cup final.

Eddie Jones will lead the team as the Baa-Baas take on Fiji for the Killik Cup on Saturday 16th November, in the only Autumn International to be played at Twickenham in 2019.

This is the first time that Jones has been named as the head coach and he’ll be hoping to follow up a successful England World Cup performance with yet more silverware.

He says, “It’s a huge honour to be invited to coach the Barbarians. The club perfectly embodies the values and traditions of the sport and fans can expect to see an exciting match between two sides who like to play end-to-end running rugby.

“2019 is a massive year for international rugby and I’m looking forward to returning to Twickenham after a successful World Cup campaign to coach a Barbarians team containing some of the stars of the tournament.”

It will be the first international match to be played in the UK following the 2019 Rugby World Cup and some of the stars of the tournament will be in action.

The Baa-Baas are famous for their attacking flair and entertaining style and fans can expect an exciting encounter when they meet a Fijian team who are also known for their fast-paced, thrilling rugby.

The last time the two teams met at Twickenham, in November 2013, more than 68,000 fans were treated to a mouth-watering spectacle of running rugby, with the Barbarians stealing the show in an electric 43-19 win.

Across their 129-year history, the famous black and white shirt has been worn by more than 5,000 players from over 30 different nations, including sporting legends such as Jonah Lomu, Brian O’Driscoll, Bryan Habana and England’s 2003 Rugby World Cup winning captain, Martin Johnson.

Tickets are on general sale now from www.ticketmaster.co.uk with a special early bird ticket offer available for a limited time only.