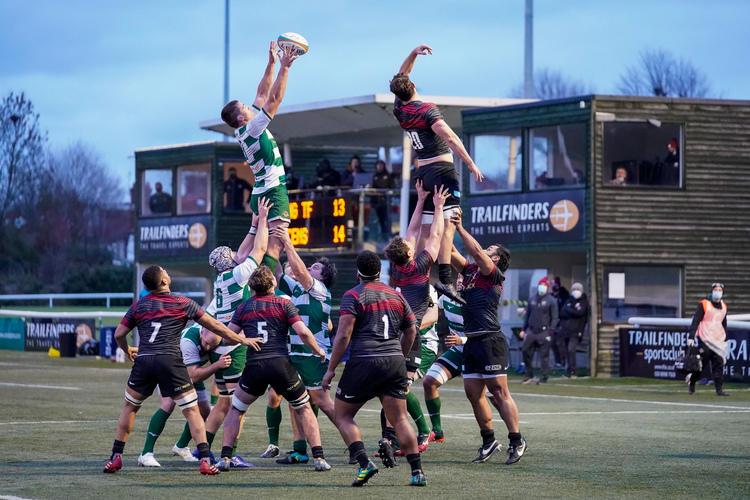 Ealing Trailfinders will face a determined Saracens outfit in their bid to end a six year stay in the Greene King IPA Championship.

Both sides are well rested ahead of their two-legged matchup, with Trailfinders granted a bye in the final gameweek while Sarries’ fixture against Hartpury was called off due to Covid protocols in their host’s camp.

Here is the lowdown on the Trailfinders ahead of their much-anticipated fixtures.

The campaign got off to a barnstorming start with six consecutive bonus-point victories over the likes of Ampthill, Hartpury and Jersey.

Their first and only loss came against relegated Premiership side Saracens in their short trip north of the capital, walking away bloody nosed in a 48-20 loss.

Normal service was resumed for Trailfinders in their remaining three matchups against Richmond, Bedford and Doncaster, boasting a +108 points difference in their final four-week span of the season.

Director of Rugby Ben Ward began his sixth season at the helm of Trailfinders in hopes of achieving their first ever promotion to the Premiership.

Under Ward, Trailfinders have maintained and stabilised their second-tier status, with hopes of making their biggest jump yet into the Premiership for the 2021/22 season.

The former Trailfinders fly-half took over the reins as Director of Rugby ahead of the 2014/15 season and led the side back into the Championship from National League 1 by record margins, notching an incredible 134 points in his maiden coaching campaign.

After surviving relegation the following season, Ealing have built on their performances each season, culminating in perhaps their biggest challenge of all in former domestic and continental champions, Saracens.

After his side’s famous away win over Sarries in the pre-season Trailfinders Challenge Cup, Ward stated:

“(Saracens) don’t really let you play. You have to win those battles; you have to be patient and have to take your time. We’ve studied them and have an awful lot of respect for them and the guys just got what they deserved in terms of the way we approached the game.”

Trailfinders continued their unbeaten Trailfinders Challenge Cup run into their Championship campaign, which hit a blip when travelling to StoneX Stadium.

With Trailfinders’ fortunes reversing in their Championship fixture, Ward declared after their 48-20 loss:

“For us, it’s all about that journey we’re on now, it’s all about learning from some of those mistakes that we made in the game and making sure we’re better. Hopefully in the next couple of weeks we can create an opportunity to have a go at the again.”

His men’s three wins in wake of their loss to his counterpart Mark McCall’s side, including a 38-15 victory over Doncaster Knights, did indeed cement another opportunity to take on Saracens in the Championship playoffs.

Trailfinders narrow victory over Saracens arrived in the maiden Trailfinders Challenge Cup and was their first ever win against the usual Premiership mainstays.

Ben Ward’s side flexed their credentials while hosting Sarries at Vallis Way, facing a team including England international Billy Vunipola.

“Billy is just a great club man, he knows the importance of senior players and their influence on the younger players,” said Director of Rugby Mark McCall of his back-rower.

Two tries from Alun Walker and one from former Ulster winger Angus Kernohan proved the difference between the sides as Trailfinders set the precedent for the following meeting in the Trailfinders Challenge Cup.

Trailfinders were more convincing in their victory over Mark McCall’s side in the reverse Trailfinders Challenge Cup game at the StoneX Stadium, winning 39-26.

Only three points separated the sides at the break, each with two tries apiece with a Dom Morris double for Sarries’ and Trailfinders’ Rayn Smid and Will Davis.

Trailfinders pulled away as Dean Hammond, Pat Howard and Shaun Malton notched five points each, cancelling out Ritomi Segun’s try and all but securing the first Trailfinders Challenge Cup.

Mark McCall’s side made their efforts count this time around in the Greene King IPA Championship fixture with a 48-20 win.

Alex Lewington, Vincent Koch (2), Aled Davies and Nick Tompkins aided in the try bonus-point win, all of whom touched down for Sarries.

Owen Farrell, contributing the remaining 23 points from the boot, was amongst a cast of British and Irish Lion selectees that featured in the match.

McCall stated that those on the plane to South Africa this summer would not be ‘undercooked’ while facing Championship opposition, arguing that Trailfinders are a mid-table Premiership team in the making.

Trailfinders reacted well to their first league loss of the campaign against Saracens at StoneX Stadium in late April with two consecutive bonus-point victories against Richmond and Bedford.

The boys in Green and White triumphed against the former in a 69-7 win at Vallis Way, their biggest margin of victory of the season against their local rivals, following that up with a 40-17 win on their travels against Mike Rayer’s Blues.

Trailfinders’ playoff-clinching win at Vallis Way against Doncaster was in fact their last of the season having been given a bye in the final week of Championship fixtures.

The initial extra week’s preparation for the playoffs for Ealing eventually worked out in Saracens favour, with the Men in Black’s final day fixture against Hartpury being cancelled after a coronavirus outbreak in the West Country side’s camp.

Fly half Craig Willis has fired himself in the top ten of both points scorers and kickers in the division, sitting fifth in both respective categories with all 58 points arriving from his famed right boot.

Four Trailfinders are represented in the top ten try scorers in the league, with captain Rayn Smid leading the pack in more ways than one with nine tries.

The Vallis Way outfit are the most represented side in the top try scorers in the Championship, testament to their scoring depth as Jordan Burns (7 tries), Max Bodilly (6 tries) and Craig Hampson (5 tries) make up the rest of those in Green and White on the list.

Guy Thompson’s recent man of the match display against Doncaster Knights was capped off with an impressive try, whose quick turn of pace breached Doncaster’s defensive line and imparted his services in the 38-15 triumph.

Max Northcote-Green, recently recruited from Exeter, slotted straight into the back row a day after putting pen to paper for the west London club on their travels to Bedford earlier this month.

The former Bath and London Irish player described the move as a ‘no-brainer’, and also featured in Trailfinders’ crucial home victory over Doncaster before being replaced by Shane Buckley in the first half of the game.

Upon arrival, Ben Ward spoke to the club after securing Northcote-Green’s services, saying “We are really excited to have Max on board in time for the final run into the end of the season. He brings a hard-working physical game, which has seen him compete at the highest level for established Premiership teams, and we are looking forward to seeing what he can add to the group. He has quickly got to grips with life here at the club and has settled well, enjoying his first few training sessions.”