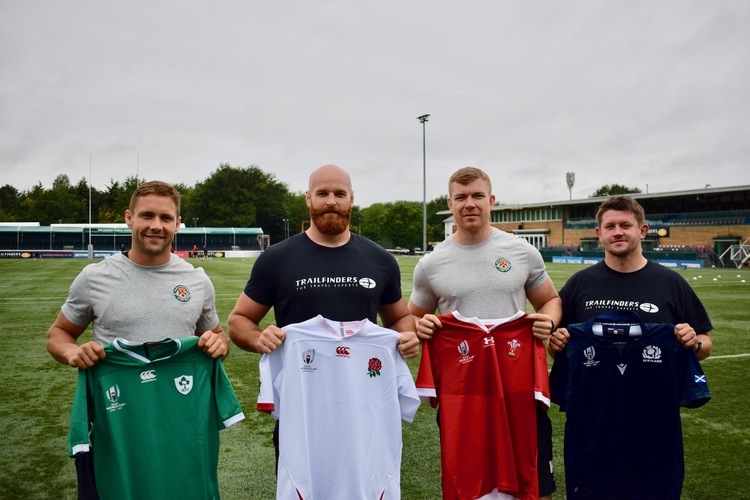 It's not long to go until the biggest tournament in rugby kicks off, with the best teams in the world fighting it out to lift the Webb Ellis Cup on Saturday 2nd November in Yokohama.

The Northern Hemisphere teams are all in a strong position to go all the way, and an Ealing Trailfinders player from each of the home nations sat down to give their opinions on the World Cup.

David Johnston from Ireland, Kieran Murphy from Wales, Sam Dickinson from England and Alun Walker from Scotland came together to chat about how they expect the tournament to go.

For each of your countries, what would you deem as a successful tournament?

DJ: For Ireland a successful tournament would have to be winning it. That’s where the mindset is and to be at the top of the world is where they want to be.

AW: You’d have to say that semi finals for Scotland would be a great effort. They have shown in recent Six Nations over the last few years that they are capable of beating the best teams and it’s up to them to show that on the biggest stage.

KM: At least the semi-finals if not the final for Wales. I believe they have a decent chance of winning it and the four teams I would say have the best chance are New Zealand, South Africa, Wales and England.

SD: England will be looking to win it. An aim will definitely be to get to the final and then anything can happen in those 80 minutes!

There are some great Six Nations rivalries in the pool stages including Scotland v Ireland and England v France, can the tournament earlier this year have any bearing on those kind of matches?

DJ: Ireland suffered a bit in the Six Nations but the way that the Irish teams finished in the Pro 12 show that they’re getting better. Munster and Leinster have big rivalries with Glasgow so it will be interesting to see how the teams go against each other.

AW: I don’t think Scotland will be looking at their previous matched against Ireland. It’s about the form of the players going in to the game and everything else will go out of the window. With Japan in that group as well it’s crucial to get off to a good start.

KM: The landscape has changed quite a lot since the Six Nations this year. Wales showed that they can beat the likes of England but psychologically they have always struggled against the Southern Hemisphere teams and they will have to do that to win the tournament.

SD: There’s no need for motivation at a tournament no matter who you are playing but everyone will be wanting to get one over each other. France can be very hit and miss but you can’t focus on one game as all of the other teams such as USA can be dangerous as well. It’s all about avoiding New Zealand for as long as possible!

Which players do you think will be most important to your nation?

DJ: I like Chris Farrell and think he can add a lot to Ireland. The options that they have in the midfield are crazy but he has plenty of power and skill in the centre.

AW: Finn Russell on his day is one of the best in the world and can change any game. Huw Jones has been outstanding and if WP Nel stays strong in the front-row that will have a chance.

KM: Liam Williams is absolutely class and has been at the top of his game for a long time now. Ken Owens is always crucial for Wales, and I think the back-row is very strong.

SD: The way that Lewis Ludlam has come through the ranks has been incredible. Courtney Lawes is so destructive which always helps, and Joe Cokanasiga has the potential to be a star.

Does the fact that this tournament is being played in Japan makes it the most open World Cup ever?

DJ: It definitely makes it more interesting. It’s also great for the game to grow it to another continent.

AW: For sure. The conditions will also be very different to what players normally have at a World Cup, and with none of the major teams having home advantage there could be plenty of upsets.

KM: It makes it very open and it will be very unpredictable. It may not help the Northern Hemisphere teams as they are used to playing in front of very partisan crowds, but the humidity will also be a big factor.

SD: Absolutely, and we can’t forget about Japan either who have the ability to beat the big teams as we saw in 2015. New Zealand and Australia have had a number of players over there for club rugby so that will help them, but Eddie Jones also knows the country very well so hopefully that helps England!

Finally, who is going to win it?

DJ: I’ve got to back them, I’m going to say Ireland!

KM: South Africa, their growth in the last year has been unbelievable.