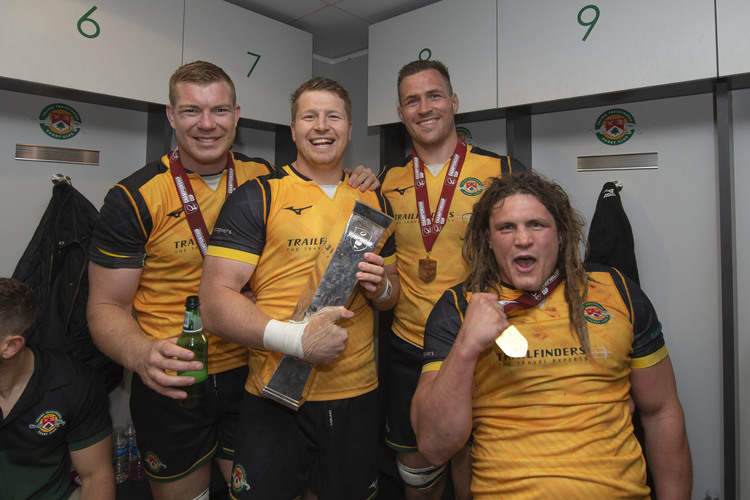 Voted for by the coaches in the division, the 2018/19 Dream Team includes representatives from no less than seven different clubs.

Always puts in a big shift with a tackle count any back-row player would be proud to call his own. Offers plenty at scrum-time and in the loose too. London Irish have snapped him up for next season. Just edged out Sean McCarthy of Bedford.

Having switched to the front row from being a flanker, Matavesi has thrived both for club and country. Endeared for his all-action style, Matavesi is often at the forefront of defence and attack and his loan move to Toulouse at the tail-end of the season was well-deserved, as was his return to the Fiji team in November after a five-year absence.

Destructive scrummager who has caused most opposition packs all sorts of problems this season. Will remain in the Championship next season after signing for Ealing Trailfinders. Cornish Pirates powerhouse Christian Judge was a close second.

Keen student of the game who gives the Reds an edge at lineout time. Stepped up to captain the side at the back end of the season. Will be playing in the Pro14 next season after signing a three-year deal with the Southern Kings.

Set to become the latest in a long line of players to make the move from London Irish to Bath after a stellar season in the Championship. At 6ft 7ins and more than 19st, McInally offers a real physical presence around the park and has played at lock and in the back row this season. Played in every game bar the final round of the season.

An ever-present for Ealing Trailfinders this season, scoring 11 tries and captaining the side. A fantastic ball carrier who is strong at the breakdown and hits hard in defence. Has covered all three back-row positions and is a real talisman of the team.

Australian breakdown specialist in the mould of David Pocock and Michael Hooper, Reid was the pick of all but two of the opposition coaching teams for his brilliance at pilfering opposition ball. Aggressive runner who was voted Ealing Trailfinders' Players’ Player of Year.

Hit the ground running with a man-of-the-match display against Ealing Trailfinders in the first game of the season and never looked back. The powerful ball-carrier warded off the threat of Janco Venter, his replacement at Jersey, and Yorkshire Carnegie’s Dan Temm, in this most competitive of positions.

Has fine-tuned his core kicking and passing skills to become a more rounded nine, not just a running threat. Cornish Pirates’ Alex Day was unlucky to just miss out and Lee Dickson got a couple of votes in his swansong season at Bedford.

Summer move to Harlequins is recognition of a fine season in which Herron benefitted from regular rugby. Possesses good evasive skills as well as being an adept distributor and kicker. Honourable mentions go to Rory Jennings and Stephen Myler of London Scottish and London Irish respectively.

Has an excellent strike record whilst at Ealing Trailfinders and has been no stranger to the try line again this term with 12 tries from 17 starts. Also possesses good aerial skills and carries the ball well. Championship top try scorer Dean Adamson came close to retaining his place from last season, while London Scottish’s Rob Stevenson and Cornish Pirates duo, Alex O’Meara and Robin Wedlake, came under consideration.

Restored to his preferred position at inside centre after a spell as a makeshift fly-half, Lucock has been a rock of consistency in Yorkshire Carnegie’s rollercoaster ride of a season with his hard running lines and tough tackling. London Irish’s Terrence Hepetema impressed and might have made the team had he played more than half a season.

Before his untimely injury towards the end of the season the former U20 World Cup winner had gone from strength-to-strength in the heart of the London Irish midfield. His balanced partnership with Hepetema earned rave reviews from the Exiles’ faithful and was as solid in defence as it was potent in attack.

Equally comfortable on either wing or at full-back, van Dam has been a superb addition to the Reds’ squad. Works hard with and without the ball and has reaped the rewards

Can turn defence into attack in the blink of an eye with his searing pace and eye for a gap. Has the ability to bounce back off the ground and back on to his feet in a flash, making him a hard man to stop. Kyle Moyle was the only other contender for the full-back slot.