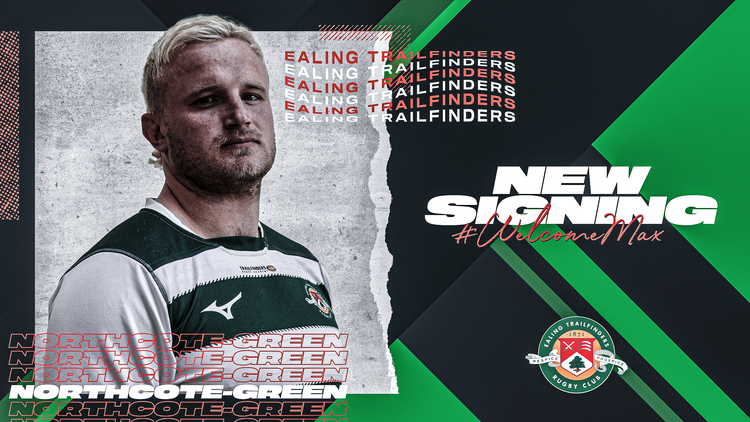 Ealing Trailfinders are pleased to announce the signing of Max Northcote-Green from Exeter Chiefs.

Ealing Trailfinders are pleased to announce the signing of Max Northcote-Green from Exeter Chiefs.

The Dulwich born Flanker, who has spent the last four months at Gallagher Premiership Champions Exeter Chiefs on a short-term contract, joins the Trailfinders, bolstering options in the back-row for Ben Ward and his coaching team.

Standing at 6ft 2, and weighing 107kg Max has caught the eye with strong ball-carrying skills, adding a new dimension to Trailfinders front-line.

Starting his professional career at Bath Rugby after being spotted at Millfield School, Northcote-Green spent his first two years on loan at Coventry and Rosslyn Park before a move to London Irish in 2016 where he made 44 appearances, scoring 35 points for the Exiles.

Speaking on his arrival at the club the 27-year-old has expressed his excitement for a new challenge.

“It was a bit of a no brainer really, a new challenge at a club that’s got a lot of aspirations and I can’t wait to be apart of that journey.”

“The boys have made me feel really settled, there’s lots of strength and depth in the back row and they have brought me up to speed with the plays and how they run things. There’s a reason why they have so much success you see how tough the training is and I can’t wait to get stuck in now.”

Trailfinders Director of Rugby has spoken of his enthusiasm for what Northcote-Green can bring to the team.

“We’re really excited to have Max on board in time for the final run into the end of the season. He brings a hard-working physical game, which has seen him compete at the highest level for established Premiership teams, and we’re looking forward to seeing what he can add to the group. He’s quickly getting to grips with life here at the club, and has settled well with the guys, enjoying his first few training sessions with the squad.”