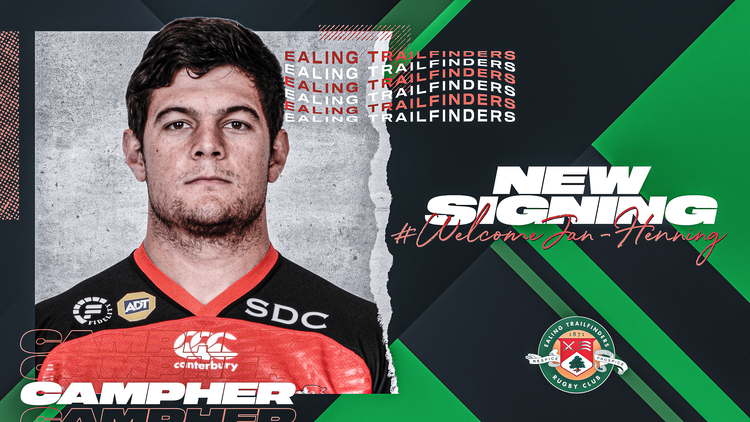 Ealing Trailfinders are delighted to announce the signing of Jan-Henning Campher.

Born in Pretoria, South Africa, Henning-Camper is a 6’1, 110kg hooker who joins the club from The Lions.

The 24-year-old has represented South Africa at both schools and under 20’s levels making eight appearances for his country.

He made his first-team debut for the Blue Bulls XV in the 2016 Currie Cup qualification series, coming on as a replacement in their 17–38 loss to neighbours Golden Lions XV in Alberton, and made a further three replacement appearances in the competition. He has since gone on to make 29 appearances for the Lions.

Speaking ahead of his move Campher is looking forward to his new challenge.

“I'm excited to start the preparation for the new season at Ealing Trailfinders. I'm also looking forward to some exciting challenges and forming new relationships with my teammates and coaches along the way.”

Ealing Trailfinders Director of Rugby, Ben Ward, has also spoken of his excitement on the signing.

“Jan-Henning is a talented hooker, who comes with good experience in Super Rugby. He is physical around the pitch in both attack and defence, has a good work ethic and is a strong scrummager. We are really excited by what he can bring to our squad.”