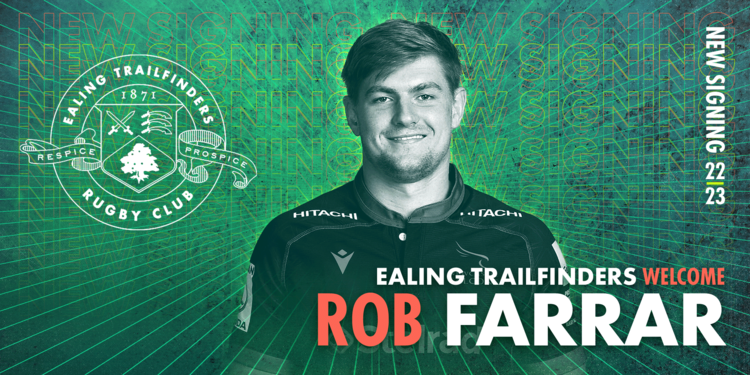 Newcastle Falcons back-row Rob Farrar is the latest player to sign for Ealing Trailfinders ahead of the 2022/23 Championship campaign.

The highly talented second row/back row represented England U18s and played a key part in the Sedbergh School squad that secured the U18s National Championships and the Rosslyn Park 10s. He was promoted to the Newcastle Falcons senior academy in 2018, and made his first-team debut against Hartpury University in the 2019/20 Championship season.

Rob achieved his Premiership debut in March 2021 and since featured a further 14 times in a Falcons first-team shirt. The 22-year-old was capped by England U20s in 2020, appearing in the Six Nations fixtures against Ireland and Wales.

Speaking ahead of his move to Trailfinders, Rob commented: “I’m very much looking forward to getting down to London and getting involved. I can’t wait to join a club hungry to progress and build something really exciting for the future.”

Director of Rugby Ben Ward added: “Rob is a very ambitious and driven competitor who joins our club determined to succeed and make a powerful impact. He has developed into a very strong player at Newcastle and we’re equally excited to see how he responds to his move to London and the opportunity to progress even further at Trailfinders.”