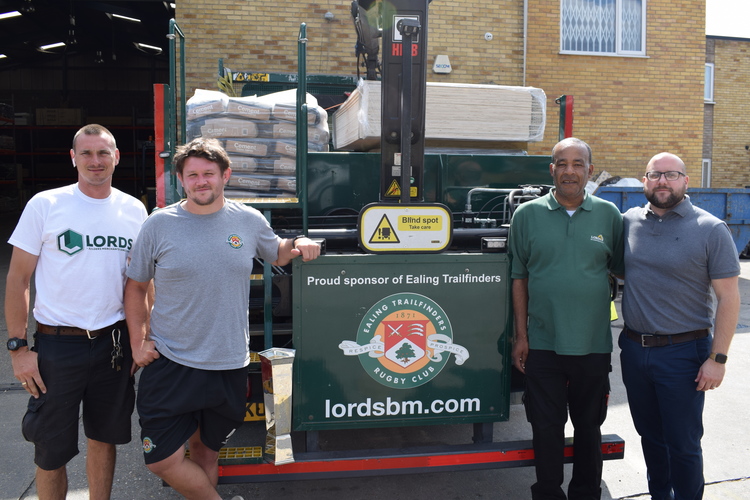 Ealing Trailfinders are delighted to announce the extension of the agreement with Lords Builders Merchants to enter a fifth season.

Lords will continue to be a huge part of the match day at Trailfinders Sports Club, with their logo on the brand new home and away kits as well as a number of advertising boards around the pitch.

The Builders Merchants will also be sponsoring Alun Walker, who last season became the first player in the professional era to make his 100th appearance for the club.

Lords has built its reputation on service, reliability and flexibility. They first opened their doors in 1985, and they now boast a fleet of over 40 vehicles, including 38 HGV’s and seven vans to ensure a next-day service.

When Lords started sponsoring Ealing Trailfinders they had two heavy side branches (Park Royal and Hayes) as well as smaller outlets in Westbourne Grove. Now they have added a branch in Beaconsfield and taken over George Lines Civils Merchants in Colnbrook.

Tim Holton,Group Acquisition & Integration Director is pleased to extend the deal for another year.

Lords have just opened their thirteenth branch whilst when they started the sponsorship they had only four and Trailfinders have cemented their place in the Championship with two consecutive second place finishes as well as winning the cup for the last two years.

We wish Trailfinders every success this season as they attempt to gain a much deserved promotion to the Premiership, we are proud to have been associated with the club over the years.”

Ealing Trailfinders Director of Rugby Ben Ward is delighted to continue the partnership with Lords.

“Lords have played a huge part in our journey over the last five years and we are very pleased that they are on board for another season.

They have become familiar faces on match days and we are excited to work with them moving forward. We would like to thank them for their continued support as we embark on another year of Championship rugby.”